Dutch Rusk began from humble beginnings back in 1974 when Klaas Van de Geest immigrated from Holland with his wife Henny and their three boys, Willem, Jack and Chris. In 1978 their fourth son David was born.

In 1984 Dutch Rusk was founded by Klaas operating out of his garage at home to support his young and growing family. With a van and a small amount of products, Klaas hit the road selling. He was determined to provide the best service to his customers and always paid his suppliers cash on pick up. After many long lonely hours on the road, many of which was spent sleeping in his van, Klaas quickly out-grew his garage.

In 1988 Klaas moved his business to his first warehouse in Pascoe Street, Nelson – this was one of the first milestones as it included his two elder sons Willem and Jack. With his sons' help, their first truck was purchased and there was no stopping them!

The next 10 years was very tough for the Van de Geest boys as the Confectionery market in New Zealand was coming of age. This saw an increase in competitors launching brands, all wanting a slice of the pie. Despite this, Klaas and his boys continued to push forward, providing their customers with unwavering service. They soon developed a loyal customer base which later paid dividends for them.

In 2000, Klaas retired and handed over the reins to Willem and Jack. They wanted to take another step forward and tried their hand at importing their own products. So off to ISM Cologne Germany they travelled with only hope and a prayer. This was the beginning of many business trips to Europe and in 2006 business started to develop out of China, the birthplace of the Dragon Sweets Brand.

By this time a fleet of confectionery trucks had slowly been put together, servicing customers throughout the South Island. To support the growth, the business was moved to a purpose-built warehouse in Nelson's Echodale Place, and a second warehouse was set up in Christchurch.

After 30 years of hard work, a smarter way of doing business was introduced in 2013. Operations were centralised back to the Nelson Head Office, and the Christchurch warehouse was closed. The fleet of trucks was taken off the road and the reps took to cars armed with sales tablets, enabling them to carry real-time information on the entire range of stock at their fingertips.

And as they say "the rest is history" 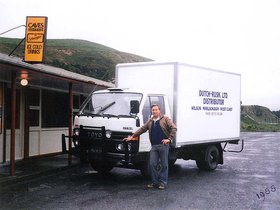 Klaas on the road 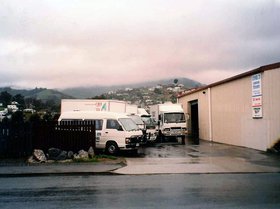 Willie and Jack on their first trip to China

Here at Dutch Rusk we adhere to all National Food and Safety standards. It is our goal to provide the safest quality products and to do so we work with the following organisations.